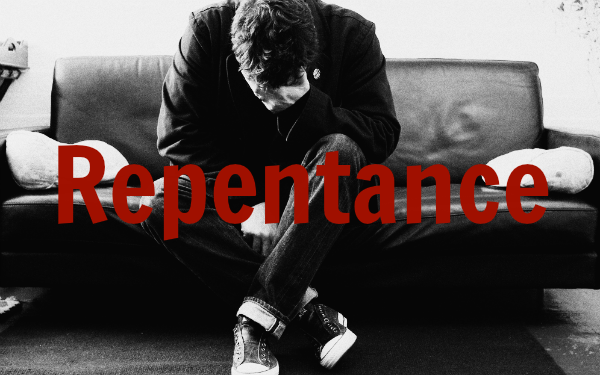 It’s embarrassing but true: all around us we see people seriously messing up, ourselves included.   It happened to people in the Bible  too.  If Noah could get drunk and lie naked, if Abraham could lie about his wife being his sister, if Moses could kill the Egyptian, if David could commit adultery with Bathsheba and then kill her husband to cover his tracks, if Peter could deny the Lord three times in a row, on what grounds shall we think we are above similar sins?  We too yield to the lusts of the flesh; murder (think of abortion or suicide), drunkenness (think also of drug abuse), adultery (incest), consumerism, hedonism, wasting one’s time, being careless stewards, and so many more sins appear among godly people who regularly attend church.

The effect of sin is devastating.  As children of God, unconfessed sin has a way of getting inside our hearts so that we feel guilty – thankfully.  But not every child of God immediately admits their sin in repentance.  Then it becomes difficult to pray, and the desire to open the Bible evaporates, and they end up going to church and to the Lord’s Table because you don’t want to draw attention to themselves, and God seems so far away – until they return to the right way through sincere repentance. (See David’s experience of the effect of sin after his affair with Bathsheba in 2 Samuel 11 &12)

For that’s the gospel of the perseverance of the saints: even when His people fall into terrible sins, God will not desert His own!  Rather, He works upon them through His Holy Spirit so that repentance comes about – eventually.  That’s our God: He does not forsake the work His hand has begun.

David speaks of his repentance from his affair with Bathsheba in Psalm 51:

“For I know my transgressions, and my sin is ever before me. Against you, you only, have I sinned and done what is evil in your sight, so that you may be justified in your words and blameless in your judgment.” (Psalm 51:3-4) And, “Create in me a clean heart, O God, and renew a right spirit within me. Cast me not away from your presence, and take not your Holy Spirit from me. Restore to me the joy of your salvation, and uphold me with a willing spirit.” (Psalm 51:10-12)

Grief: that’s not a sense of ‘oops’.  It’s rather anguish of heart, “heartfelt sorrow” that we’ve offended holy God.  Peter “went outside and wept bitterly” (Mt 26:75) – and that’s obviously grief from a broken and contrite heart.  His sin bothered him, deep inside he felt absolutely rotten.

Sorrow for the sin one has committed comes coupled with a sense of hate.  No, it’s not hatred for the neighbor, but hatred of the sin and all that led to the sin.  It’s a loathing of self too in the sense that one is far from proud of one’s accomplishments and abilities.  The hate leads to a deep sense of humiliation.  It’s what the psalmist called a “broken and contrite heart” (Ps 51).

The result in turn is that one flees, gets away from the proximity to whatever led to the sin – for he doesn’t want to fall again into the snare of the devil or the world, or succumb to the weaknesses of his own flesh.  Yet it’s not just a fleeing from; it’s a fleeing also – to Christ in whose blood there is abundant forgiveness.

Actually, it takes quite a man to flee.  One can assume that any true man will stand his ground and conquer his opponent.  Yet any general out to win the war knows that there comes the moment when he has to retreat – and that’s not an admission of failure but a display of prudence.  The child of God knows he has no chance against enemies as the devil, the world, and his own flesh, and so flees to the Christ who defeated the devil and the world, and has poured out His Holy Spirit so that the fight against the flesh is possible.  To stand and fight in this instance is actually a display of pride – and the taller one’s pride the harder one’s fall shall be.

Coming to Life of the New Nature

Repentance is more than the dying of the old nature; the other side of the coin is that a new nature is increasingly made alive.  This coming to life of the new nature has two aspects:

Fleeing to Christ brings one into the arms of the Savior who conquered sin and Satan, and reconciled sinners to God.  His good news is that my atrocious sin is washed away like gravy off a plate – irretrievably gone.  Holy God, then, does not look upon me as the murderer or adulterer or thief or drunkard I am, but sees me as washed clean in Jesus’ blood.  Instead of anger and judgment, there is mercy and grace.  That reality cannot leave the heart untouched, but fills it with grateful joy and songs of thanksgiving.

That sense of gratitude for deliverance from the righteous judgment of God results in a renewed determination to live for God in all I do.  Instead of the environment that led to the sin, the repentant child of God actively pursues a different environment, one that promotes a lifestyle pleasing to the Lord God.  He surrounds himself with friends and activities that encourage praise for the Redeemer and discourage another relapse.

Repentant people grieve from the heart with a godly sorrow for the sins they have committed; they seek and obtain through faith with a contrite heart forgiveness in the blood of the Mediator; they again experience the favor of a reconciled God and adore His mercies and faithfulness.  And from now on they more diligently work out their own salvation with fear and trembling.

Is the doctrine of repentance worth repeating for general consumption?  I’d argue that the answer is Yes, simply because our culture does not know what repentance is.  One ‘apologizes’, one says ‘Sorry’, but the grief and the hate and the fleeing and the joy and the delighting to live God’s way is a rare thing in Canada’s public and not so public life.

To cry buckets of tears is not the same as repentance, and an expression of remorse is not the same as repentance either.  Judas Iscariot “was seized with remorse” when he saw that Jesus was condemned, and “returned the 30 silver coins to the chief priests”, and even admitted that “I have sinned, for I have betrayed innocent blood” (Mt 27:3,4).  But his remorse and his admission did not amount to repentance; for he did not flee to the Christ he betrayed and pursue a life of godliness.  Similarly, Esau’s tears at missing out on the first-born blessing did not amount to repentance (Hebrews 12:17).  Repentance is so much more than saying ‘sorry’, for it involves the heart.  Repentance goes beyond remorse, for it involves a changed lifestyle.  Repentance is not shallow, for it involves a deep awareness that none less than holy God has been offended.  Repentance fills one with joy, because God’s declaration of forgiveness-for-Jesus’-sake heals and thrills the heart broken on account of sin.   How merciful my God: He restores the undeserving!