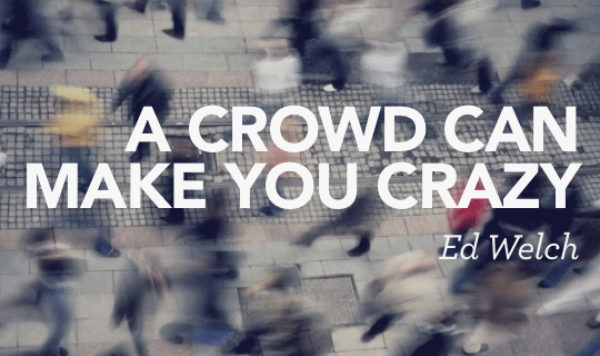 Many of the stupid, foolish and sinful things we do involve a crowd, even if the crowd is just one or two other people. Examples:

It is as if sin and foolishness need only the slightest encouragement to break loose. Psychology 101 calls it the ‘risky shift’, in which individual opinions move in a more polarized and risky direction when in a group. It’s probably what lies at the heart of the housing market collapse. Somebody said, “The housing market is sure thing. Let’s make even more money by offering home loans to people who can’t really afford it. What could happen? . . ..” And soon others followed…. “Hey, they are doing it, it must be okay.”

We are not very good at imagining consequences to begin with. Now add another voice that accents the present thrill or gain and ignores what could happen next, and all of a sudden you are like a football team, hooting and hollering with excitement before the big game, totally in the moment and only in the moment.

So, when the behavior is exposed, and the question is asked, “What were you thinking?!” The answer is rightly, “I don’t know.”

If there is more going on in the mind, it might be a simple formula: the larger the crowd, the less the blame. If I make a foolish decision and get caught, I am to blame. But if I am with four friends, I only share in 20% of the blame, if 99, then only 1% of the blame. This is the kind of formula that can lead to crucifixions.

Yes, this is familiar ground. Peer-pressure revisited. Every wise person should be alert to it.

Edward T. Welch, M.Div., Ph.D. is a counselor and faculty member at CCEF. He earned a Ph.D. in counseling (neuropsychology) from the University of Utah and has a Master of Divinity degree from Biblical Theological Seminary. Ed has been counseling for over 30 years and has written extensively on the topics of depression, fear, and addictions. His books include: When People Are Big and God is Small; Addictions: A Banquet in the Grave; Blame it on the Brain; Depression—A Stubborn Darkness; Running Scared; Crossroads: A Step-by-Step Guide Away From Addiction; and When I Am Afraid: A Step-by-Step Guide Away from Fear and Anxiety.