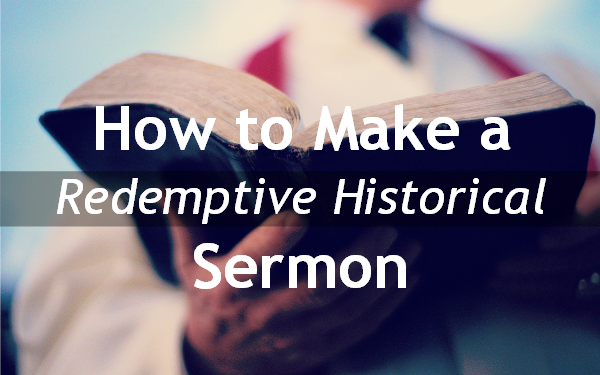 How To Make a (Redemptive Historical) Sermon

The following is a slightly shortened and modified translation of “A working method for the preparation of sermons on OT narrative material”, which was printed as attachment to  Dr. C. Trimp’s  booklet De Preek[1] (The Sermon).   His method consists of four phases, which he calls analysis, synthesis, administration, and evaluation.

Analysis refers to the first phase of the sermon making process: exegesis. The usual exegetical steps are to be followed (establishing the meaning of words and sentences, etc.). Taking the context into account, the specific character of the passage needs to be determined. In order to do that, the exegete needs to look back, look around, and look ahead.

These questions will help the preacher to gain an understanding of the redemptive-historical aspects of the text passage. In order to ‘fine tune’ these aspects one could use the four questions which prof. B. Holwerda formulated: the ‘already’, the ‘not yet’, the ‘no more’, and the ‘still’.[3]

The intention of these questions is not that a preacher should explicitly deal with them in the sermon. Rather, he should use them as ways to approach the full meaning of the text.

During this phase we attempt to establish the actual authority of the text passage for the actual congregation to whom we intend to preach. The task of ‘bridging the historical gap’ is now before us.

What is being accomplished during this phase will determine the content of the sermon. Four aspects may be distinguished.

The final phase of sermon preparation is the evaluation of the result. After the grammatical meaning, the Scriptural message and the subordinated elements have been determined and formulated with a view to the congregation, we should ask the question: Do the various elements strengthen or contradict each other? Do they form a harmonious unity? Do the ‘basso continuo’, the ‘cantus firmus,’ the harmonization and the counterpoint, all serve to bring out the theme? Do they together produce a well composed and well structured end product? At this point simplicity and evidentiality will prove to be important characteristics of good preaching.