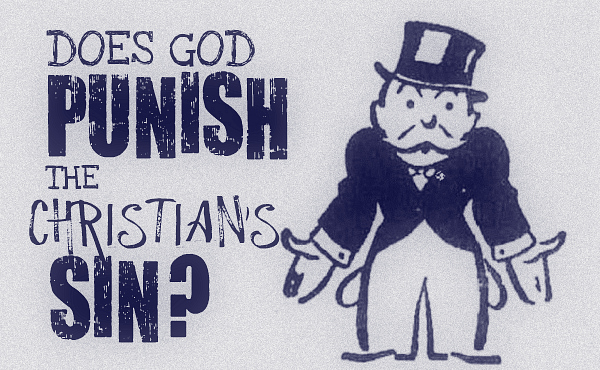 The Lord, we confess, has punished our sins in Jesus Christ on the cross.  We’re sure: if Jesus Christ has in fact paid for all our sins through His perfect sacrifice on the cross, there simply is no judgment left for us on our sins.  After all, God does not punish the same sins twice – once on His Son on the cross and then a second time on us who committed the sin.  And that’s true.

Yet that’s not the complete answer to the question.  There are, after all, countless instances in the Bible when the children of God experienced God’s heavy punishment on their sins (see below).  How, then, does that work?  Does God punish the Christian’s sin after all?

Yes, the Bible is emphatic that God’s people most certainly can –and do– experience in this life the just judgment of God on their sins.  Consider the people of Israel in the desert.  Please remember that Israel was God’s people by covenant, treasured by Him.  They even had the gospel of redemption proclaimed to them faithfully in the tabernacle God told them to build; its sacrifices directed the people to how the coming sacrifice of Jesus Christ would cover their sins.  This people had also pledged their allegiance to God, indicated their devotion to Him and their embrace of the gospel of free grace.  My point: the people of Israel in the desert were, at the end of the day, as rich in Jesus Christ as we are, and they embraced the same gospel we embrace.

God’s covenant people did what comes naturally to people.  Numbers 11 relates that they “complained about their hardships” (vs 1a), and “when [God] heard them His anger was aroused.”  In the words of Lord’s Day 4 of the Heidelberg Catechism: God “was terribly displeased with [their] actual sins,” and He expressed His hot displeasure by sending “fire from the LORD” to burn among them so that “some of the outskirts of the camp” were consumed (vs 1b).  The “just judgment” of God hit them “now” (as that Lord’s Day has it) – and the result was a number of burials, and deep grief in many tents.  The remainder of the chapter gives further examples of God’s judgment upon His own people in this life, as does chapter 12 (Miriam gets leprosy) and 14 (every Israelite over 20 must die in the desert).

In the New Testament too

But let me not stay with the Old Testament, as if this were simply an Old Testament puzzle.  The apostle Paul wrote a letter to “the church of God in Corinth, to those sanctified in Christ Jesus and called to be holy” (1 Corinthians 1:2).  This was a congregation of true Christian believers who were washed in Jesus’ blood, sanctified and sealed through the Holy Spirit (as the church echoes Scripture’s teaching in Article 27, Belgic Confession), and so people who belonged at the Lord’s Table.  Yet within this congregation there were those who attended the Holy Supper in an unworthy manner and so ate and drank judgment on themselves (1 Corinthians 11:29f).  On the authority of the Holy Spirit Paul lays a direct link between the Corinthians’ actions and the sicknesses in their midst: “that is why many among you are weak and sick, and a number of you have fallen asleep” ( vs 30 – and ‘sleep’ means they died).  Imagine that: God was so displeased with the sins of His children in Corinth that He punished His church in that city by a just judgment right there on the spot!  Nothing of: their sins are forgiven in Jesus’ blood so that there’s no punishment possible for them anymore….

Recall too Jesus’ letter to the church in Ephesus.  “You have forsaken your first love,” He writes.  “Remember the height from which you have fallen!  Repent and do the things you did at first.  If you do not repent, I will come to you and remove your lampstand from its place” (Revelation 2:4f).  In the years that followed, the Lord Jesus Christ in fact did “remove the lampstand” from Ephesus; no longer did the light of the gospel shine in that city, for God in His providence let the church in that place die out.  Why??  Not because they were all ungodly people!  But He did it because they had forsaken their first love.  That is: in the course of years they’d lost the depth of an active communion of saints.  That was sin before God, and there was a penalty for that sin; by the just judgment of God their light was snuffed out.  And that’s the pattern that comes back time and time again in the Book of Revelation.

All Sins transferred to Jesus Christ?

No, dear reader, the Lord our God does not punish sin twice.  Sins placed on Jesus’ shoulders have been fully taken away such that there is no more punishment from God on those sins (be it that we may still need to live with the consequences of those sins, but that’s a different topic).

How so, you wonder?  Well, there is need for repentance from sin, and confession of sin.  Recall that letter from Jesus Christ to the church of Ephesus in Revelation 2.  Jesus describes His church’s transgression, then adds the instruction to “repent”.  He adds further, “If you do not repent, I will … remove your lampstand” (Rev 2:5).  Jesus’ point is clear: to receive the freedom from judgment that flows from Christ’s work on the cross, one needs to be pious in the service of the Lord.

The same message comes through in that passage to the Corinthians.  Because of these Christians’ selfish attitude in coming to the Lord’s Table, “many among you,” says Paul, “are weak and sick, and a number of you have” died.  Paul explains why it’s so.  He says, “But if we judged ourselves, we would not come under judgment” (1 Corinthians 11:31).  His point is plain: these Corinthian Christians did not give thought to whether they were living in sin, but simply assumed that the death of Jesus Christ covered all their transgressions.  In the words of Lord’s Day 4.11, they assumed that “God was indeed merciful.”  Paul would agree, but he’s adamant: God “is also just.  His justice requires that sin committed against the most high majesty of God also be punished with the most severe, that is, with everlasting, punishment of body and soul.”  That heavy hand of God’s punishment pressed upon the Corinthian congregation in the here and now –why?– because of their failure to judge themselves.  They failed, in other words, to acknowledge sin, to fight sin, to repent of sin.  And they were paying the price with the deaths in their midst.

It leaves us confused, and distressed.  Bad things happen in our lives.  Does the fact that something bad happened in my life mean that I have sinned and haven’t repented??  As in: the tragedy is my own fault??

John Calvin put it this way: when a believer is struck by a calamity, he “immediately descends into himself to consider his sins” (Institutes, III.4.32). That is: according to Calvin the believer accepts the fact that God does not let sin go unpunished, believes too that sin is punished in Jesus Christ. However, the believer also acknowledges his own continuing sinfulness, including an unwillingness to admit particular conduct as sin.  So, in the face of calamity, the Christian will examine himself to ensure that he’s not left particular sins unconfessed.  That, says Calvin, is the proper default Christian response to trouble; it’s self-examination.  Have I failed to repent of particular sins?  Are there things happening in my life that I know are wrong but I just assume that God is OK with those wrongs?  Am I through hardness of heart preventing God’s blessing and attracting God’s curse?  Calvin is insistent: the pious Christian knows his own sinfulness and stubbornness, knows there can be no blessing from God today if one does not today turn away from every sin he knows of, and so is quick to re-examine whether he has in fact repented of all sin.

In point of fact, this practice of self-examination has been the driving force of Christian spirituality for generations, and it produced in the centuries since the Great Reformation a style of living that took God’s commands seriously.  But in our day this sense of God punishing unrepentant sin in this life is downplayed or ignored.  It’s downplayed or ignored specifically by telling ourselves that our sins don’t have consequences because there is forgiveness in Jesus’ blood anyway.

But here is where we fool ourselves.  Against the trend of our times (and of our sinful selves), we shall need to be critical and ruthless in self-examination, and I shall need to repent of whatever sins I find, lest God’s hand crush me further.

Then it certainly may be true that as I result of honest self-examination I need to admit that I have a clear conscience before God, that I have acknowledged my transgressions before God and repented of them.  Then, says Calvin, there can be a second reason why the Lord may chastise us.  It’s also possible, he says, that God “imposes a penalty upon us – not to punish us for past sins, but to correct us against future ones” (Institutes, III.4.33).  Calvin quotes Augustine, “What you suffer, what you complain about, is your medicine, not your penalty; your chastisement, not your condemnation.  Do not put away the scourge if you do not want to be put away from the inheritance.”  But I may not, says Calvin, jump lightly to the conclusion that God is simply pruning me so that I grow in holiness.  That may well be God’s motive, but given my abiding sinfulness I need first to examine myself carefully.