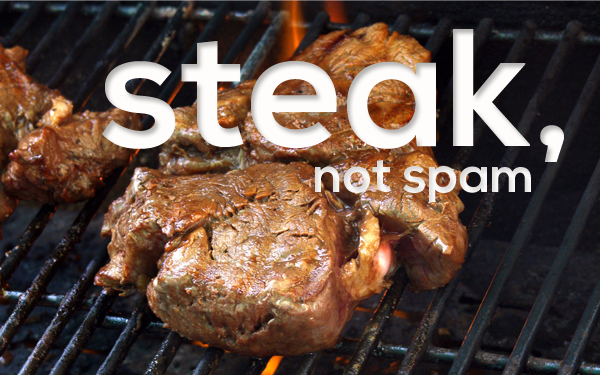 Ever wondered why Reformed churches are so big on doctrine? Just look at the size of John Calvin’s The Institutes of the Christian Religion. Many tomes on doctrine followed: Francis Turretin, the Synopsis produced in Leiden, Charles Hodge, Herman Bavinck, Louis Berkhof. See if there is a copy of “Concise Reformed Dogmatics” in your church library. Concise it is, but at over 900 pages, not brief. The Reformed are big on doctrine.

I was part of a workshop at a conference on the Heidelberg Catechism in January of 2013. We were discussing the relevance of a 450 year-old document to today and hit the question of whether the heresies combated by the Catechism are the same today. We were discussing the example of the Mennonite position on the human nature of Christ. During that discussion a couple of non-Reformed origin made the following comment: “We were attracted to the Reformed faith because that’s where we got fed steak, not spam.”

“Steak, not spam.” Spam: in our effluent society few may actually know what that is. It’s canned meat, the cheapest meat one can buy. It’s boiled meat scraps spiced up and pressed together in a can. You can imagine it doesn’t compare to steak, to a medium rare well marinated sirloin. Steak looks good and is good. Spam is a poor excuse for meat. We’d rather have a steak.

The Reformed church, so this couple indicated, is to be lauded for the steak it serves. Steak, that’s doctrine, especially doctrine as presented in the confessions of the church. This couple figured the Reformed are to be commended for being so big on doctrine.

Of course, not a couple’s opinion but the Bible decides if being big on doctrine is right. Noteworthy is an instruction Paul gave to Titus when Titus had to “put into order” the churches on the island of Crete. The Holy Spirit gave this instruction: “An elder must hold firm to the trustworthy word as taught, so that he may be able to give instruction in sound doctrine and also to rebuke those who contradict it.” Clearly sound doctrine is essential to the church! Now, “sound” in the expression “sound doctrine” can also be translated with “healthy”, both in the sense of “being in good health” and “contributing to good health”. Steak is healthy meat. Spam? Not really. Clearly a church should serve the steak of doctrine.

Sometimes people leave a Reformed church because they figure it’s too big on doctrine. Such people want more experience, more sensation, less learning. Sometimes Reformed churches will water down their doctrine to keep such people (and often the steak-eaters then leave). At first, spam keeps such people happy. After all, it is meat too and it is filling.

However, it is my experience as pastor that after a while such people do miss the steak. In Holland I was involved in a church plant in an area where orthodox Reformed churches had disappeared. I would frequently preach along the lines of the Catechism. A senior couple once came to me: “It’s been thirty years since we last heard such a sermon. How we’ve missed it.”

Steak is always better than spam. Enjoy the steak the Reformed serve. It’s a little harder to chew than spam, but it’s healthier by far. Be big on doctrine.