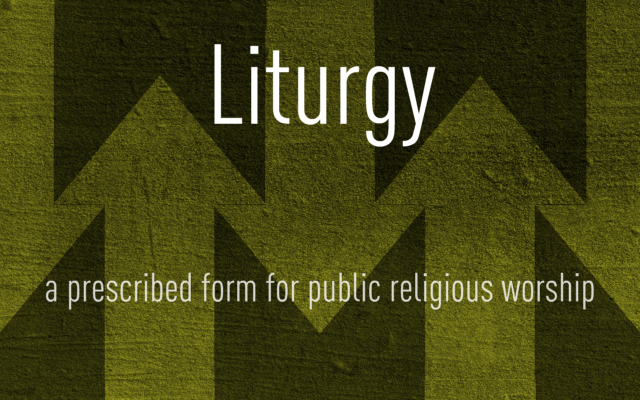 The term ‘liturgy’ refers to a prescribed form for public religious worship.  God is particular about how He is to be worshiped. In Lord’s Day 35 of the Heidelberg Catechism the church echoes God’s instruction in the second commandment like this: “we are not … to worship Him in any other manner than He has commanded in His Word.”  Though there’s not a moment of our lives that falls outside of our worship of God, this worship receives a particular focus in the church service.  We’re used to the Order of Worship in the service, so much so that one seldom hears questions about why we do things the way we do.  Perhaps a little review wouldn’t go astray.

The worship service can be broken into a number of sections, each section made up on several parts.  The parts of the first section are as follows:

In the greeting the Lord God responds to the congregation’s confession of dependence.  How rich that is: as a sinful congregation confesses dependence on God in the troubles of life, the Lord replies not with a statement that life’s bruises and tears are deserved, but with a word of grace!

How understandable, then, that once the congregation has heard this word of mercy from their Father in Jesus Christ –sinful though this congregation is!- the assembly breaks out into a song of adoration!  This song catches the gratitude that lives in the hearts of the people on account of God’s mercy caught in those familiar words of Greeting.

The second section of the liturgy revolves around confession of sin.  There cannot, after all, be a conversation between holy God and a sinful people as long as sin stands between them.  This section is made up of the following parts:

Notice again that these points constitute a dialogue.  Through the mouth of the minister, the Lord God reminds us of His covenant with us, how He through Jesus Christ has delivered us from bondage to sin and Satan, and what sort of behavior ought to follow.  The congregation in turn sings a song that captures our sense of guilt for sin and/or our gratitude that God has not rejected us despite our sins.  The congregation expresses that same sense of guilt and/or gratitude in the prayer.

In some churches a reassurance of forgiveness in Jesus Christ receives a place after the song.  There are arguments in favor of that addition, but its sense can also be expressed in the song and the prayer.

The third section of the church service centers on the proclamation of God’s Word.  It involves:

After that blessing has been sought in prayer, the Lord replies with His Word.  In His providence He has placed particular readings on the liturgy, together with a text.  In His providence too He has given the minister insight to prepare a sermon.  That sermon (if all is well) makes plain the teaching of Scripture in the context of the struggles the congregation experiences day by day.  Through that Word the Lord instructs, encourages, admonishes, and comforts His people in their particular circumstances.

The final part of the church service is at the same time its climax.  Forget not: sinful people have come into the presence of holy God to speak with Him and He with them.  After the back-and-forth conversation between an undeserving people and their God-by-covenant, the people in their circumstances have received much instruction, encouragement, admonition, comfort, etc, from their God.  Whether the text and sermon were ‘positive’ to human ears or not takes nothing away from the fact that it’s a marvel of God’s grace that He actually spoke to sinners.  As God’s first word in the service was a word of grace (the Greeting in the First Section), so all God’s speaking in the church service is grace.  In gratitude for God’s grace as evidenced in the Word He caused the congregation to hear, the congregation responds with its final song.

And in the song the congregation also anticipates God’s final, glorious words.  For those final words form the climax of the service.  The minister raises His hands over a congregation of sinners, and expresses those glorious words: “The grace of the Lord Jesus Christ, the love of God, and the fellowship of the Holy Spirit is with you all” (2 Corinthians 13:14; or a passage with similar sentiment from Numbers 6:24-26).  Think on it: the congregation is about to return to the brokenness of life as it’s experienced in the home and the office and work and school.  Yet before dismisses the congregation to return to that brokenness, the God of the covenant reassures them of His grace and love and fellowship!  This is no time to pack up one’s books; this is a time to marvel, to soak in the gospel of God’s favor!

Of course, the dialogue between our God-by-covenant and ourselves as His children does not stop once we go our several ways after church.  Instead, at home we receive the opportunity to work with the Word He’s given to us, and continue to speak to Him in song and prayer.  More, our lifestyle is worship-continued, our expression of gratitude for the gospel the Lord has impressed on us in the church service.

In the above sketch I have not mentioned the collection.  Liturgically speaking, its proper place would be in the Third Section, as part of the response of the congregation to the riches of God’s grace as manifested in the preaching of the gospel.

I have also not spoken of the announcements.  Since they are not part of the dialogue between God and His people, they properly fall outside the worship service.