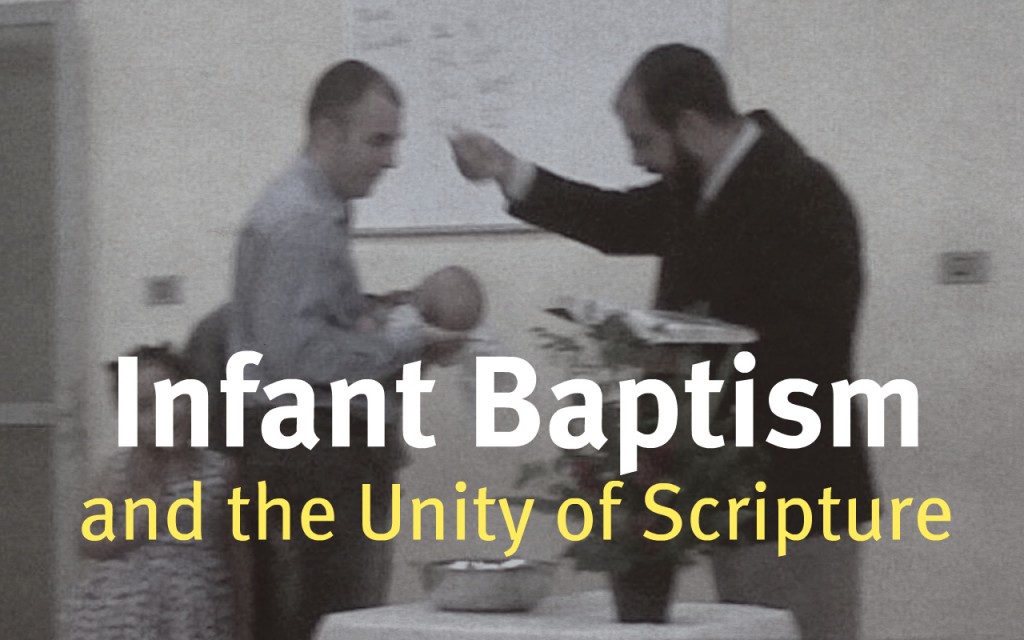 It’s standard fare that Canadian Reformed people have their infants baptized.  Around us are countless Christians who don’t think the Bible teaches infant baptism.  Our younger and not so young members meet these other Christians, end up talking about baptism – and questions arise about whether the Lord actually wants the newborns of the congregation baptized. Then it’s pointed out that there is no text in the New Testament commanding the baptism of children; in fact, the New Testament does not even have examples of children actually being baptized.  So our questions become bigger: is infant baptism simply a (Canadian) Reformed peculiarity that ought to be jettisoned in the name of Biblical faithfulness and unity with fellow Christians?  What are the grounds for infant baptism?!

Is it indeed true, though, that the message of the Old Testament is somehow different from that of the New Testament?  The answer is No.  Consider the following passages:

Perhaps you will counter that the New Testament is surely called ‘new’ for a reason.  Did Jeremiah not prophesy of a “new covenant”?  Indeed, he did.  “‘The time is coming,’ declares the LORD, ‘when I will make a new covenant with the house of Judah…” (Jeremiah 31:31).  As a result we read repeatedly in the ‘New’ Testament of a “new covenant” (1 Corinthians 11:25; Hebrews 9:15).  But the word ‘new’ is not to be contrasted with ‘old’ – as your ‘new’ car is a totally new machine from your ‘old’ one.  The same word that’s translated in Jeremiah 31 as ‘new’ appears in Psalm 104:30 to describe springtime: “When You send your Spirit, … You renew the face of the earth.”  The same word appears also in 2 Chronicles 24:4 to describe Joash’s plan “to restore the temple of the LORD.”  Because of Israel’s hardness of heart in their service to God, the Lord promised through Jeremiah to make a “new covenant” – yet not one that is essentially different from the covenant God made with their fathers when He took them out of Egypt, but one that reaches deeper into His people’s heart.  For this time “I will put My law in their minds, and write in on their hearts.  I will be their God, and they shall be My people” (Jeremiah 31:33).  Note those closing words: this covenant is described with the same words as God used for His relation with Abraham and with Moses so long ago (Genesis 17:7; Exodus 20:2).  It’s the same covenant –“I will be their God”– yet ‘new’ in that it’s renewed, refreshed, deepened.

I need to belabour this unity between the Old Testament and the New Testament.  Writing to Christians of Rome, Paul claims that Abraham “is the father of all who believe” (Romans 4:11) – and the context makes clear that the word ‘all’ refers to both the Jew (of the Old Testament) as well as the Gentile (of the New Testament dispensation).  Paul adds, “Therefore, the promise comes by faith so that it may be by grace and may be guaranteed to all Abraham’s offspring – not only to those who are of the law but also to those who are of the faith of Abraham.  He is the father of us all” (Romans 4:16).  We need to catch his point well.  The Christians of Rome had no Jewish blood in them and so were not children of Abraham by birth.  Yet Paul insists that this foundational figure of the Old Testament was “the father of us all,” Jews and Romans alike.  That is: Old Testament believers and New Testament believers have one father, Abraham.

How are we to understand this?  The apostle wants us to think of a tree.  Because so many Jews rejected Jesus Christ as the fulfillment of Old Testament prophecy, God (says Paul) broke those fruitless branches off the tree of Abraham.  But since God wanted His tree to bear fruit, He in mercy grafted new branches –Gentiles– into this same tree.  These Gentiles then are as much children of Abraham as were their believing brethren of the Old Testament (see Romans 11:17-24).  There is, then, one tree-of-faith spanning both testaments, a single tree rooted in Abraham, sustained by faith in Jesus Christ, and bearing the fruit of the Holy Spirit.  This is why Paul can elsewhere say that “there is one body and one Spirit …, one Lord, one faith, one baptism; one God and Father of all” (Ephesians 4:4-6).  The faith of the Old Testament is not different from the faith of the New Testament, no more than the God of the Old Testament is different from the God of the New Testament.  There is a profound and essential unity (and hence continuity) between Old Testament and New.

This doesn’t, for course, answer all questions.  So I hope to take the matter further next time.  Meanwhile, if we’re convinced again that the Bible needs to be seen and read as a unity, we’ve made progress.

Picture by Ken Wieske. “Victor, son of Waldemir and Iraçema is baptized by Rev. Adriano in the Alberto Maia congregation of the Church at Recife, Brazil. Waldemir grew up in a rough neighbourhood: most of his childhood friends are either dead or in prison. Waldemir has served as an elder, is a director the the Centro de Literatura Reformada (CLIRE) and is completing a law degree. He is also chairman of the Guido de Brès school board. His family is a testimony to the transforming power of the Word and Spirit of Christ.”