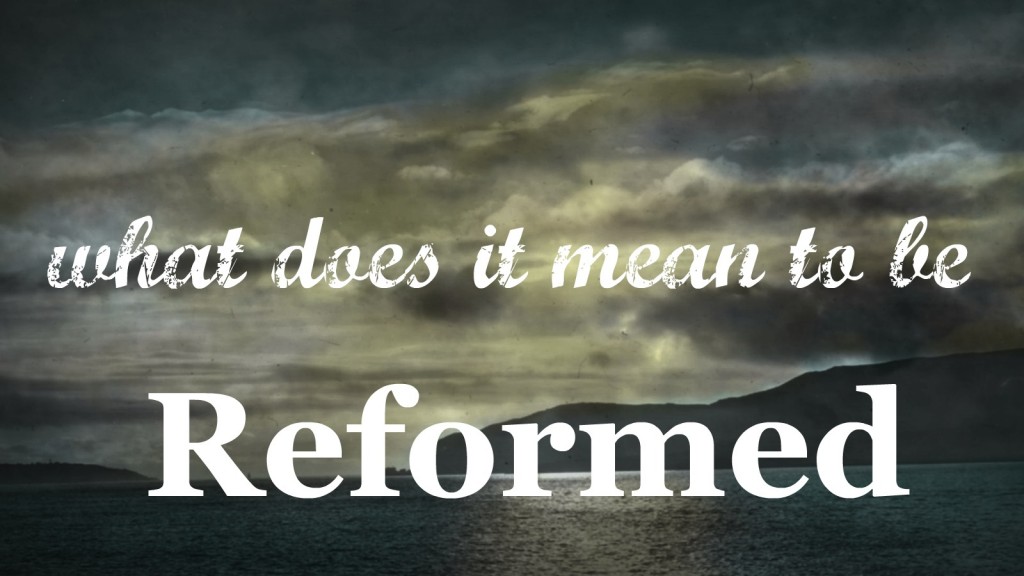 The religions of the world are many, each offering their own understanding of the deity or deities (as the case might be).  The persons behind this website are unashamedly Christian, and so believe in triune God as revealed in the Bible.  This sets us apart from adherents to Islam or Hinduism or Shintoism, etc.

The Christian faith is in turn represented in today’s world by many schools of Christian thought.  Each of these schools of thought embrace and defend their own understanding of who God is, and so of how He is to be served.  The persons behind this website are unashamedly Reformed – which in turn sets us off from Christians of Anabaptist or Roman Catholic or Pentecostal or Arminian persuasion.  What, then, does it mean to be Reformed?

The term ‘reform’ captures the Biblical concept of ‘turning’, and is used to describe a return to the ways God revealed in His revelation.  One speaks, for example, of the ‘reformation’ King Hezekiah initiated in Israel, when he sought to turn the people away from service to idols to revere again the God who claimed them for Himself in His covenant of grace established with them at Mt Sinai (see 2 Chronicles 29-32).

In the course of Church History the term ‘reform’ is used specifically in relation to the ‘reformation’ in the 16th century.  In this ‘reformation’ countless thousands in Europe, under the leadership of reformers as Martin Luther, John Calvin, Ulrich Zwingli and others, distanced themselves from the teachings and practices of the Roman Catholic Church and returned to the simple instruction of Holy Scripture.  Those who followed the reformer John Calvin came to known as ‘Reformed’, in distinction from those who followed Luther (Lutherans) or Menno Simons (Mennonites), etc.  Churches of continental origin in the mould of Calvin’s thinking tend to have the term ‘Reformed’ in their name, while Calvinist churches of British origin tend to have the term ‘Presbyterian’ in their name.  Both are theologically ‘reformed’ in their thinking.

“…to be reformed is to have great thoughts of God, small thoughts of man, and deep, deep gratitude for God’s boundless mercy to sinners in Jesus Christ…”

What, then, is distinctive of ‘reformed’ thinking?  Typical of Reformed thinking is specifically the way one sees who God is, His God-ness, if you will.  This one central principle of reformed thinking has several flow-on implications that I list below.

Reformed thinkers, and so faithful Reformed Churches, take God for real.  He is not the product of human thought or hopes, but very real and living.  Unlike our world, He has been from eternity, one God in three Persons, having no need outside Himself – and so not needing mankind either.  That Father, Son and Holy Spirit are one true God is to Reformed believers an incomprehensible riddle, but in no way a problem ‒ for the creature man can never be ‘big enough’ to understand the Godhead of the Creator.  The Reformed thinker is content with that, for a God he could understand is not worthy of worship, let alone trust.

This almighty God fashioned the world through His word of command in the space of six days, and He has upheld the world He made ever since.  The force of the term ‘upheld’ is that if almighty God were to withdraw His supporting hand this world would immediately collapse again into the nothingness it was before He made it.  All creatures, then, are fully dependent on Him for existence itself.  Further, the God who upholds this world does more than keep the world existing; He also governs it so that history happens according to His pre-arranged plan.  Earthquakes and hair loss come not by change or through scientific necessity, but instead by His Fatherly hand (whereby pressure on tectonic plates and one’s genetic makeup are simply the means God uses to bring about the earthquake or the baldness).  And if one seeks to understand why He allows earthquakes to happen (and some people to lose their hair), the Reformed thinker does not insist that God give account to man – for God and His wisdom is so exceedingly far above what any man can comprehend.  (And if it were not so this God would not be worthy of worship and trust…).

The second central tenet of the reformed faith is the smallness of man.  Unlike God, man is but a creature, and therefore limited by time and space in what he can understand.  Even before his fall into sin, the creature man –simply because he’s a creature‒ could never begin to wrap his mind around God; the distance between the creature and the Creator is simply too great.  The fall into sin, of course, rendered man’s ability to understand the Creator more impossible still – and at the same time made mankind so arrogant as to think that he could understand God or call Him to account or even deny His existence.

The third central belief of the reformed faith is that this God of overwhelming and eternal greatness did not ignore the creature He made, but established a bond of love with mankind.  This eternal and holy God, in whose presence angels cover their faces, fashioned mankind for the purpose of being bound to Him and so this God of glory adopted the creature man to be His child!  Here’s a marvel one cannot begin to fathom; why would eternal God, sufficient in Himself as Father, Son and Holy Spirit, form a covenant with a creature-of-dust?!  The question becomes the more pressing –and incomprehensible‒ after mankind broke that bond of love with his fall into sin: why would eternal, holy God (sufficient in Himself as Father, Son and Holy Spirit!) re-establish this covenant with sinful man?!  How wonderful and awesome this God is!

The bond of love between God and man was and is fully God’s doing.  Neither before the fall into sin nor after the fall into sin was there anything in man that drew God to love him.  Indeed, how could it even be that eternal God should find something in the creature man that would earn His love?!  Whatever man has or is has come from God to begin with.  It is God Himself who in mercy initiated a covenant bond with man in Paradise, and equally God Himself who in greater mercy reached out to man again after he spurned God’s covenant love in Paradise.  To re-establish this bond of love, the Lord God had to ransom sinners from Satan’s grasp as well as ensure that the penalty for sin be paid; the creature man, after all, did not have the wherewithal to free himself from Satan’s grasp and did not have the wherewithal either to pay for sin.  In the face of man’s bankruptcy and weakness the Lord did not leave man in his misery (though He would have been justified in doing so), but determined instead to become man Himself in the person of the Son so that Jesus Christ –true God and true man‒ could atone for sin, deliver sinners from Satan’s might, and reconcile sinners to God.  Redemption, then, is in no way the work of man; salvation is instead the gracious work of sovereign God to those who don’t deserve it.  And this mercy, of course, points up the more how wonderful this glorious God is!

With redemption, then, so fully God’s work and God’s grace, with no person having the slightest claim to such redemption (both by virtue of his being a creature of God’s making as well as by virtue of his having spurned God’s covenant love in Paradise), no person has any right to criticize God for determining who will benefit from His mercy in Jesus Christ.  Both the number of those who are saved as well as the specific identities of those who are saved are fully and totally up to sovereign God.  This is predestination, the teaching that God determines who are saved.  This teaching is in fact a subset of the reality of God’s providence – the teaching that nothing in God’s creation happens by chance but all comes about by His Fatherly hand.  That includes the movement of earth’s tectonic plates and the loss of my hair, and includes then too whether I hear the gospel of redemption or not, as well as whether I believe the doctrine of redemption or not.

The final characteristic essential to what ‘reformed’ means is the notion of human responsibility.  Though man is but a creature-of-dust (and now sinful as a result of the fall also), God fashioned him with the ability to make responsible decisions.  Since God endowed man in the beginning with this ability, man is responsible to act in agreement with this ability – and God holds him accountable to act according to this standard.  It is true that with the fall into sin man lost the ability to act responsibly-before-God, for all his actions (and words and thoughts) have become defiled by sin.  But since this inability is not because of a weakness in how God made man, but is instead because of man’s deliberate disobedience in defying the Creator’s demands, God continues to hold all people responsible for all their actions – and eternally punishes those who act irresponsibly before Him.

Though sovereign God controls all things (including what I eat for breakfast and who will be saved), I am responsible for all my conduct (including that I eat well and that I believe the gospel of Jesus Christ).  My inquisitive human mind hungers to rationalize how God can be 100% sovereign and I be 100% responsible at the same time, but this is a riddle no human can solve – simply because we are finite and God is sovereign.  The reformed thinker accepts this reality, takes his responsibility seriously, and praises his God for the good decisions the Lord enables the believer to make.

What, then, does it mean to be reformed?  In sum, to be reformed is to have great thoughts of God, small thoughts of man, and deep, deep gratitude for God’s boundless mercy to sinners in Jesus Christ – a mercy directly specifically to me that I am allowed to be His child for Jesus’ sake!  Lord’s Day 1 of the Heidelberg Catechism catches the resulting comfort so well:

but belong with body and soul,

both in life and in death,

to my faithful Saviour Jesus Christ.

He has fully paid for all my sins

with His precious blood,

and has set me free

from all the power of the devil.

He also preserves me in such a way

that without the will of my heavenly Father

not a hair can fall from my head;

indeed, all things must work together

Therefore, by His Holy Spirit

He also assures me

and makes me heartily willing and ready

from now on to live for Him.

To be reformed: what a privilege!